In the Senne valley, we are creating around ten natural retention water areas. All of these areas could store a total of more than 350,000 m³ of water to limit flooding in the basin. In addition to this objective, facilities are created in each of the zones, in order to preserve, protect and increase biodiversity. The improvement of hydromorphology as well as ecosystem services is also taken into account in each of the zones. Ecosystem services represent the benefits that humans derive from ecosystems without having to act to obtain them. 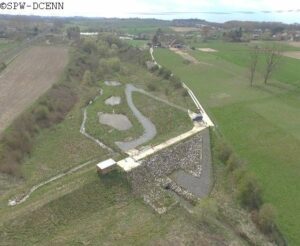 Construction of the temporary natural retention water area on the Coeurq in the Senne basin took place in 2018. This area is capable of holding approximately 70,000 m³ (around 70 million litres) of water. In addition to flood control, its construction also improves biodiversity and promotes new ecosystem services. Contrat Rivière de la Senne is the local coordinator for optimising biodiversity and ecosystem services. SPW-ARNE is the project leader and Walloon partner in the LIFE Belini project. 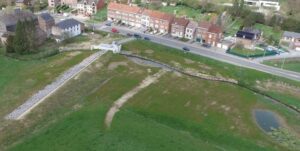 It is the second zone completed. It was put into operation at the start of 2021 and makes it possible to retain more than 40,000 m³ of water in the Hain valley. It partially protects the city center of Braine-le-Château from flooding. In the area, ponds, a triple-row hedge of native shrubs, hibernacula, etc. have also been added to promote biodiversity. 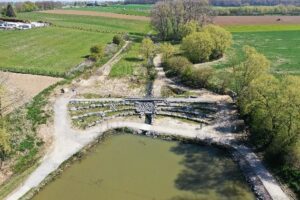 The retention area on the Cafenière (also called the Prés à canonne river) is located just upstream of the Cafenière pond in Soignies. This NRWA was completed in 2021, thus making it possible to temporarily store around 32,000 m³ of water in the event of flooding or heavy rainfall. There are also new ponds, a path, educational panels, etc that have been added to the area thanks to the project.

Fourth NRWA created as part of the project. From the end of 2022, it will make it possible to temporarily retain 50,000 m³ in the event of flooding on the Ry Ternel, a watercourse in the municipality of Ittre. Various developments have been implemented in the area, the objective of which is to promote biodiversity, the hydromorphological quality of the watercourse and even ecosystem services.

This area will be able to retain approximately 10,000 m³. The aim here is to act where possible, but for a low retention volume. Here, a meander of the Senne at Tubize will be developed to provide temporary storage during floods or heavy rainfall. Two permanent/semi-permanent ponds will be created there.

The future Pont-Neuf NRWA is located in Bierghes in the municipality of Rebecq and could store around 30,000 m³, making it possible to store upstream and thus relieve the Senne downstream.

Other NRWAs should also see the light of day as part of the Belini project in Enghien on the Querton river, Braine-le-Château on the Hain river, Seneffe on the Renissart river and Ittre on the Baudémont river.

Finally, the LIFE Belini project will allow the renaturation of certain already existing retention water areas, such as the Steenkerque NRWA or the By-pass of Quenast in Rebecq, by setting up small facilities for biodiversity and for education and environmental awareness.

Land and water development project in the valleys of the Molenbeek, the Zevenborrebeek...